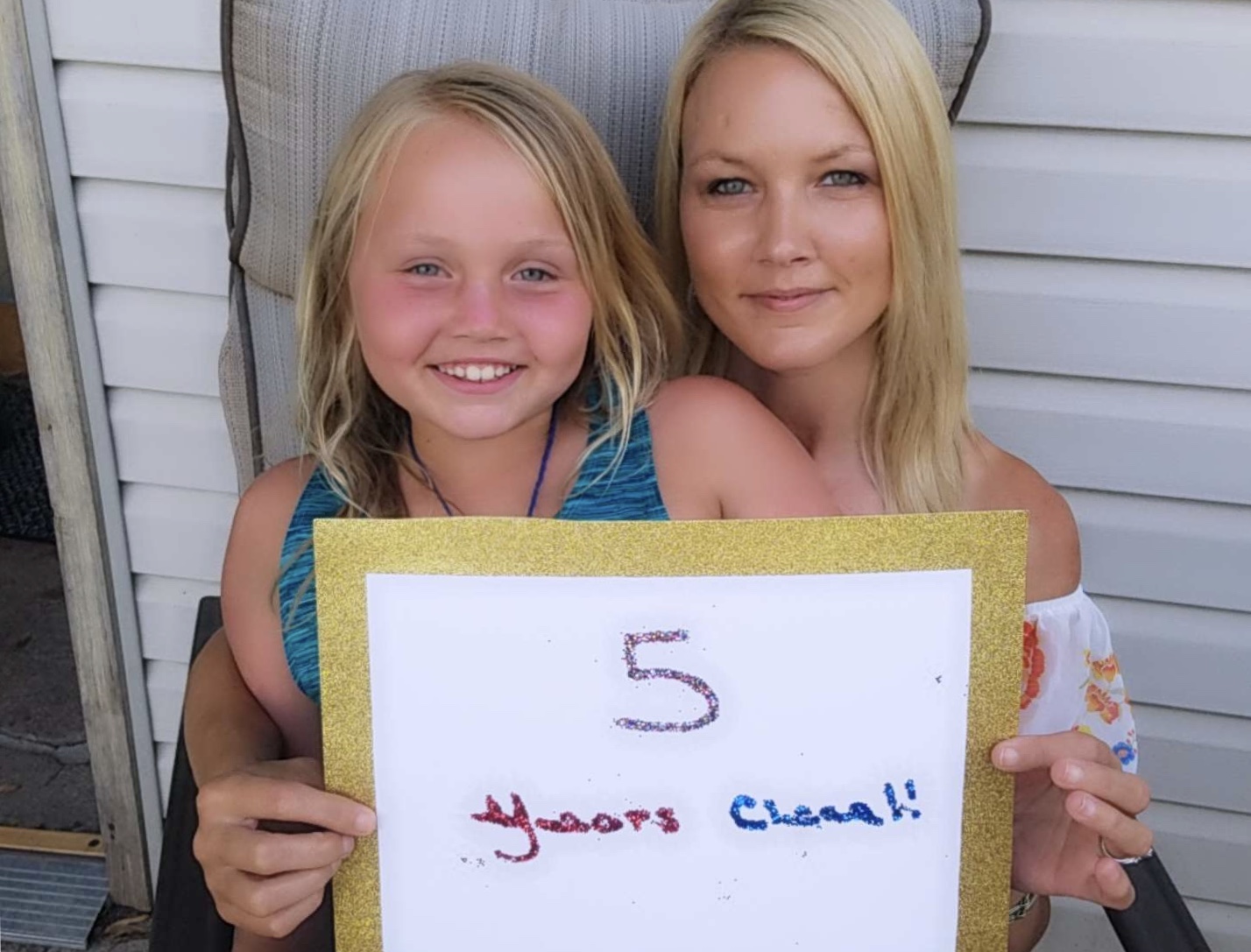 I started experiencing trauma at a very young age, and it went on into my teenage years. I was physically, emotionally, verbally and sexually abused.

I grew up hating drugs because my bio mom was an addict and left when I was 2 years old. I don’t recall ever hearing the word “addiction” back then let alone everything it entails.

I had my first drink when I was 11 years old, my second at 14 and once I turned 18 I was drunk every night. I was in a serious car wreck a few months after I turned 18. I broke my neck in 2 places and wasn’t supposed to make it through the night. This slowed me down from the drinking, but I started smoking pot shortly after this.

This was my thing for a while. I ended up dating my childhood best friend when I was 20 and got pregnant and had my son at 22. That was the happiest that I had ever been, and my life felt complete. You’d of thought that this is where I’d get my act together, right?

I switched jobs a year and a half later. I took a 2nd shift job because soon as there was tension at home I found myself sneaking to the bar for an hour after work. Eventually an hour turned into all night. There were a lot of days I’d take care of my son on a few hours of sleep. His dad and I split up and I did good with not drinking for quite a while until he started keeping our son overnight. I didn’t know what to do with myself, so I went to bars with friends. My marriage was on again off again and he begged me to go to AA but I refused because I didn’t have a problem. See, it’s hard to know how messed up you are when you’re that messed up.

Fast forward a little, I was offered a job at John Deere two hours away and decided a fresh start would be good for me. I picked my son up every Friday after work and spent the weekend with him. I met someone at work, he was an everyday drinker and daily pot smoker, and I dabbed in valium here and there.

I got pregnant and of course I stopped everything, even cigarettes. A year after my daughter was born I was having neck pain and migraines. My doctor prescribed 120 hydrocodone a month. It didn’t take long until I was abusing them and buying them, when I couldn’t find those I turned to stronger opiates. My addiction progressed, and I started missing visits with my son. I can’t remember the lame excuses I gave him anymore on why I wasn’t able to come and get him for the weekend. Truth is I was out of pills and having withdrawal. Finding more pills was my priority. My son was so tired of having his heart broken that he asked me to sign my rights over. I seriously felt like I was dying. I told him that I would always love him and that I’d always be there and that I would do what he asked me to do.

A few weeks later I was suddenly doing Meth. It took the pain away for a short while. It didn’t take long for my world to come crashing down. I was living a nightmare and I had turned into someone that I didn’t recognize.
I sat in the basement sad, dark and soulless. I made the decision to take my daughter and move back to my home town, so I could get clean.

I was clean for 3 weeks when I decided to take my daughter back to see her dad. I was under the impression that he was clean, he was not, and I ended up going to jail that night for domestic assault. That’s a whole other story. I saw the judge in the morning and he informed me that there was a protective order on my daughter.

I stayed clean as my focus was on helping my daughter. I called DHS and they started an investigation, and it was a founded case for substance abuse. This was the best thing that I have done for myself, as this is where my life began to change. My daughter was temporarily placed with family while I was early in recovery. I relapsed four months after being clean and the department suggested residential treatment where I could have my daughter with me.

We weren’t allowed much freedom, but one place we could go was once lost now found at a local church. I remember wanting what these people had. I was clean, but I was still struggling with bondages, obsessions and guilt. After several times of going to the service I finally accepted the invitation to go up front to be prayed over. Three people prayed over the things that I had been struggling with and I can’t describe exactly what I felt that night but for the first time in a long time I felt peace.

After 4.5 of residential I felt like I wasn’t getting anywhere and made the decision to leave. I couldn’t take my daughter with me. That was one of the hardest choices I ever had to make. I ended up relapsing again but this one was very short lived.

Something clicked, I finally realized what everyone meant by doing this for myself. I engaged in recovery programs, went to therapy to finally deal with the past trauma that led to my addiction, worked a 12-step program, and continued to grow in my faith.

I got my daughter back 4 months later, was able to get a full-time job and our own home. I am happy to say that today I am 5 years clean. I’m happily married, my daughter is amazingly happy and I’m working as a mentor for recovering addicts.