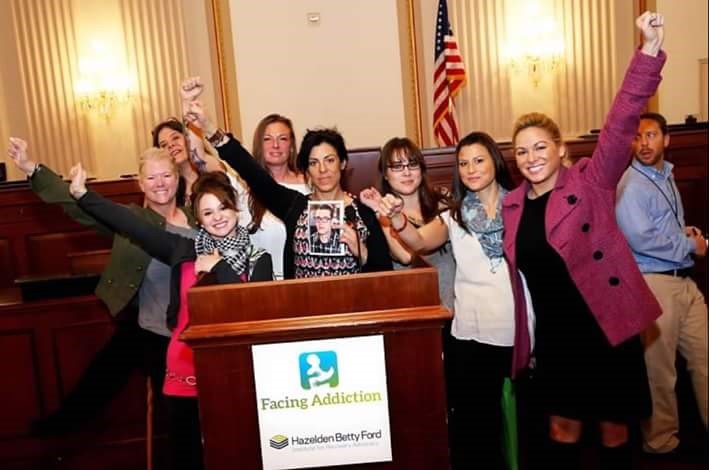 My name is Terria Jean Walters, I am 44 years old.

I live in Alaska and have since 1977 when my parents brought me here during the pipeline. I grew up in a home that was full of addiction, alcoholism and physical and sexual abuse. I had gotten high with my parents starting at the age of 4. In 1984 I was placed in states custody. For several years I bounced around to foster care then in 1987 I was incarcerated at the age of 14 at Fairbanks Youth Facility for “unlawful evasion” (running away). In 1989 I was released again and ran away. I remained on my own living on the streets until I got on a plane and left Alaska. That began my time of hardcore drug use.

I traveled the west coast using and selling meth and LSD. I slept outside, panhandled for food and stayed in drug infested motels when I could afford to. In 1990 I got pregnant with my son Christopher and went back to Alaska. I continued to struggle with addiction. I had also accepted my father back into my life, which was a toxic decision. My life was chaotic and I couldn’t grasp what it was like to live a normal life; I had never been taught. I was in and out of jail, in and out of abusive unhealthy relationships and struggled to take care of myself and my son. I had a daughter in 1995 and she went to live with her father. In 1995 I started working in escort services to fund my addiction and take care of my son.

My addiction to opioids started in 1996 when I got a prescription from a doctor for a dog bite. This fueled my desire to get and stay high; opioids became my best friend. Oxycontin was on the rise and I started buying them off the streets, continuing to work as a prostitute and gaining wealthy sugar daddy’s to feed my addiction, pay my bills and take care of my son. I then started going to doctors for pain management. I was prescribed OxyContin, fentanyl patches, oxycodone and methadone. I was diagnosed with Fibromyalgia and had back problems. I eventually started using heroin in 2003 also. In 2003 I had told my doctor I was tired of taking pain meds and wanted to get off them. He was adamant I stay on them and told me I would need to be on them for the rest of my life. He refused to taper me. I was desperate. I went to the hospital on many occasions begging to get off, I tried detoxing myself but got so sick that I couldn’t stand it and would return to using. In late 2004 my ex-husband told me meth would help with withdrawals, so I tried it and met a meth cook. I got off the opioids but switched one drug for another and eventually learned how to cook meth myself. My son was 13 by this time.

I went back to my old boyfriend and we started cooking meth for personal use (small 1-2 grams at a time) in a bus in Big Lake, Alaska. My son was there and I eventually allowed him to use drugs too. On January 7, 2005 the Alaska DEA raided my bus and charged me with manufacturing. My son was placed in the custody of the state. I was released on bail 11 days later and started cooking again. On March 23, 2005 the DEA raided me again and charged me with another meth lab. A manhunt was out looking for me. I was caught and arrested April 2, 2005. On August 7, 2007 I was sentenced to 20 years with 8 suspended on a first degree drug charge. My son was placed in foster care.

While in prison I realized in my heart I was done. I gave my life to God and wholeheartedly surrendered. My son and I stayed in contact weekly. He told me he was glad I was in there and that he was super proud of me. I completed two in patient treatment programs; 26 months all together. I stayed sober since the day I was arrested. In 2009 I applied for parole and was granted it. My son graduated (the first to graduate in my family), became prom king and prepared to go to college. I was released May 2010. My sentence wasn’t over though. I had no work history, a barrier crime that barred me from working in social services (to include substance abuse counselor) and no one wanted to rent to a meth cook. So, I rented rooms from people off craigslist and started out at 20 hours a week at a retail store. My son and I were happy to be connected all the time. He had struggled with addiction issues however.

I eventually got a job in a restaurant and became one of the managers. My son worked there with me. We rented a place together and life was good. In 2011 I founded Fallen Up Ministries; an organization that assists inmates, felons and addicts. In February 2015 my son relapsed after two years clean. On June 22, 2015 he left home to go to a new job and never came home. Him and I discussed that I had the 700 Club coming the next day and he had agreed to clean the kitchen and his bathroom. I got home around 11pm and he hadn’t made it home. I was worried but I thought maybe he spent the night at a friends, but that just wasn’t like him. His phone was off. The next morning I filmed with the 700 Club and during the whole day I was calling my son but no answer. That afternoon I reported my son missing. At 5am I got a call from a trooper; the trooper that had arrested me for my drug charges in 2005. He was at my door. I spoke to him about my son missing and after a half an hour he informed me he had been found murdered in the backseat of his car in Big Lake, Alaska. I was devastated and crushed. I was also angry. I knew that it was over heroin.

Since my sons murder I have remained sober and took my grief and channeled into advocacy and furthering Fallen Up Ministries goal. I have not shut up about addiction. I made sure I took it all the way to DC with 7 other women from Alaska. I attended the Unite to Face Addiction Rally and participated in Advocacy Day. I am now part of the Matsu Opioid Task Force that is a team of people in long-term recovery, medical professionals, nonprofit organizations and treatment providers for solutions surrounding this epidemic. We have come up with a protocol utilizing The Bridge Device, Vivitrol, peer support and treatment. A complete non-narcotic approach to recovery. Our program is called the Lazarus Project.

I stay in recovery today because of my relationship with Jesus Christ, my sober support, my friends and because I know my son would want that…honoring him. I still have hope and have not lost it because of my son’s death. In fact, it has driven me to help others until my last breath. I lived a life of displacement, chaos and wandering. Today, I am a home owner, taxpayer, advocate and a person in long-term recovery from opioids, meth and methadone. I celebrated 12 years on April 2, 2017. My journey of addiction sorrowful, painful and hopeless. My journey of recovery has been painful, tough, worth it and is full of hope!

All my life the enemy has tried to destroy me. However; I no longer have allowed him to even in my tragedy. My son’s murder will not be in vain. God has a purpose in my pain and I will see my son again.  Genesis 50:20-You intended to harm me, but God intended it for good to accomplish what is now being done, the saving of many lives.