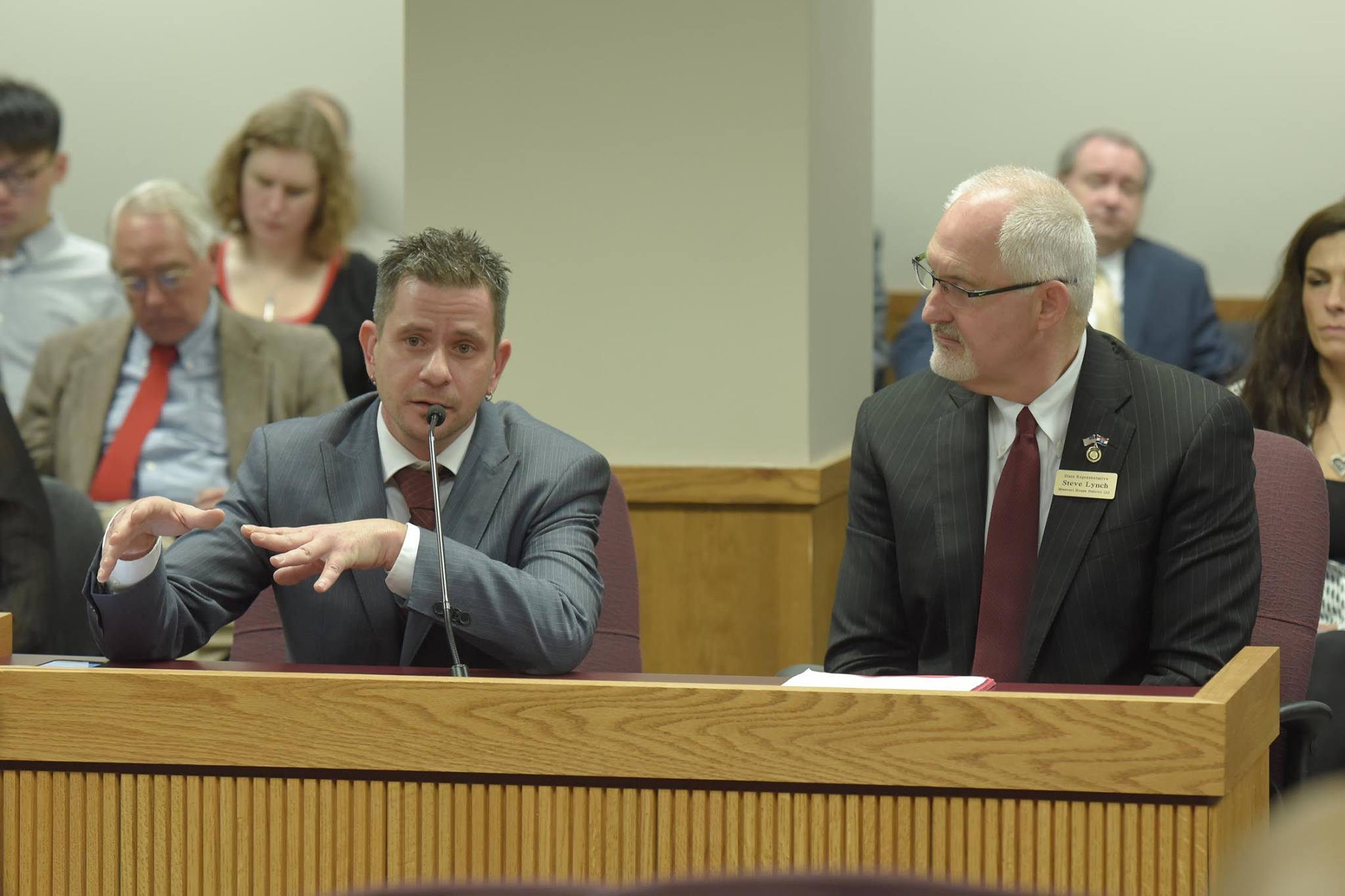 I pulled my car over to the side of the road off of Cicero Avenue right before the on ramp to highway 270 in Chicago. The West side of Chicago and this stretch of Highway was one of the first roads in America to earn the name Heroin Highway and rightly so, since before my time it has been an open air drug market for heroin. My first trip down this road was in my senior year of high school in 1994. It was now 2008 and here I was again in fact I never really left. This trip though would change my life and set me on a course I never fathomed possible.

I made a quick phone call to my estranged fiancé at the time and before I could even get my dope out to use I was being dragged out of the car. At first I thought I was about to be murdered but I quickly realized that the two men were undercover narcotics officers. As I was thrown down to the ground face first I knew it was just a matter of seconds before the cuffs would come on. What I am describing here is nothing shocking for anyone that has struggled with substance use disorder. However, what they found in my pocket turned this into something a little different. They threw the heroin they found on the ground in front of me and then they threw my badge from my other pocket on the ground next to the dope. At the time of this arrest, I was a prosecuting attorney in Cook County, IL. There I was staring at the reality and lie of my life. My addiction was my reality and that badge was the lie I was living.

The news of my arrest and addiction broke quick. My arrest and mug shot was on every news station and paper. There was an even a gathering of live reporters at the courthouse located at 26th and California for my bond hearing. There is more to this arrest though that drove a pillar of shame right through my soul. My father who had passed away from leukemia in 2005 was extremely well known in the Chicago area as a pioneer in the addiction treatment world. He overcame his own struggles long before I was born and spent his life as a counselor and executive at Gateway foundation. So, there I was, my father’s son on every news outlet. That arrest brought shame on his name, my family, and it also was the first thing to pop up on an internet search of my full name or just my last name. I was sure that was how I would be remembered in this life. There is more than the arrest though that drove the shame and self-hatred because my father spent his life helping others that struggled with substance use disorder and every dime he left me, I shot in my arm. My mother also passed from cancer shortly after my father, so thoughts of suicide raged through me for years because I never thought I could make this up to my parent’s memory. I was very wrong about that.

I wish I could be writing about how that experience was the end of my addiction, but it was not. I also will not make this an account of my addiction because that is not important. All that matters is that I continued down the proverbial rabbit hole for years more making sure to destroy every relationship I had and hurting everyone that loved me. It was not until late May of 2011 that I woke up one day and hated my reflection in the mirror. There was nothing special about that day that I can recall except I finally accepted that I could not live this life anymore so I picked up the phone and went to one of the Gateway locations my father helped build. I entered my sixth and last treatment center on June 8th 2011.

I was still dope sick when I left treatment the first week of July but there was no time for that. I had too many things plaguing my mind. Redemption of my father’s work, my family’s name, and I had developed a case of survivor’s guilt. You see I had no insurance when I made that call to Gateway. The only reason I got a treatment bed as quick as I did was because of who my dad was. There is no doubt in my mind that if I did not get into treatment as quickly as I did I would have been dead within a few weeks. This fact did not sit right with me since millions of others out there deserve the same chance at recovery that I got. So right out of treatment I got a job waiting tables six nights a week and every spare minute I had was spent hitting the books. I starting studying everything I could get my hands on about addiction. I became obsessed and at times my apartment looked like some FBI investigation but it was all about addiction; from medical theories, treatment, history, drug policy, etc. I needed to find a way to change the way things were and to provide access to treatment for anyone that needed it. In retrospect, this was a brazen idea to say the least but I was very new to this world and I was driven to do something.

I found my first connection outside of recovery rooms with a Facebook support group. Back in 2011 there were only a handful of groups out there unlike the endless ones we have today. It is sad to see what happened with the support you used to get on social media. These days the groups out there seem to be filled with narrow minded and egotistical characters that to me appear to be looking for fame or fortune instead of just being there to help someone lost and searching for help in the social media abyss. I will say this though, there are some good groups still out there but with everything else please be careful.

In March of 2008 I caught the attention of a researchers and drug policy reform advocate in Chicago named, Kathie Kane Willis. I had been on the news a few times early about nothing to significant, just some awareness rallies about all the deaths we were seeing. I was with no real direction until Kathie took me under her wing. I knew what I wanted to accomplish but had no real strategic plan. That quickly changed with the help of Kathie and a few others as did my attitude about recovery. That is because I found recovery through abstinence and was ignorant about medication assisted treatment. That attitude of mine changed and I embrace all forms of recovery today and work diligently to change the stigma about the use of medication, which is invaluable.

The work took off quickly after this. Myself and my best friend Robert Riley II formed our first not for profit and our work quickly took form. We wanted to fix more than just the lack of access to treatment but everything that has been done wrong in this country regarding handling substance use disorder. So, the mission went from brazen to outright rebellion and so we created the Rebel Recovery philosophy and movement. The Missouri Network for Opiate Reform and Recovery is the first child of the Rebel Recovery movement.  We shifted focus to a harm reduction model with heavy emphasis on drug policy reform at the state and federal level. In the span of 5 years we helped draft, get sponsored, and lobbied for various legislation. To date we have helped pass laws that allow first responders to carry Narcan, over the counter and lay person distribution of Narcan, a 911 good Samaritan law offering immunity for anyone that calls for help during an overdose, and a bill that prevents treatment courts, veteran’s courts, and family courts from denying people the use of suboxone and methadone. My original mission was not accomplished like I intended, but we have developed programs for the uninsured so it is not as hopeless as it was when I started. We also opened outreach center to implement harm reduction strategies and principles in our community with free Narcan distribution and a syringe access program. Our center also is one of the first reduced fee legal services center for individuals struggling with substance use disorder and a drop-in center for families or anyone that needs help.

All this work we became involved in got me on the news quite a bit. I have been very fortunate to be part of an Emmy winning story on NBC nightly news with Brian Williams about our Narcan distribution program, I have been on CNN and MSNBC as an expert commentator, and the television show Drug Wars on Fusion dedicated a few episodes to following me around the country helping individuals. My arrest in 2008 was no longer what came up when you googled me or my families name it had now been buried by all the articles and stories about the work we do. I thought when I started this work that accomplishing all this would be my redemption to my family, it was not though. I won’t lie, I sleep easier at night and it is amazing that I took the complete destruction of my life and turned into work that will save countless lives after I am gone. However, it did not give the peace of mind that I thought it would and I did not get that until November 16th, 2015.

I met the love of my life, Brittany in 2012 and in 2015th she gave birth to our first child Jayce Anthony Sabora. That day changed my life and everything I had done even the bad brought me to that point to be his father. I am sure that if my parents could see me now and all the work I have accomplished they would be very proud of me. However, now that I am a father I know exactly what my mom and dad would have wanted for me and that is just being a good man, a good husband, and raising my son with the loved I was raised with. That is how I finally earned my redemption to my parents and how I keep their love and memories alive.