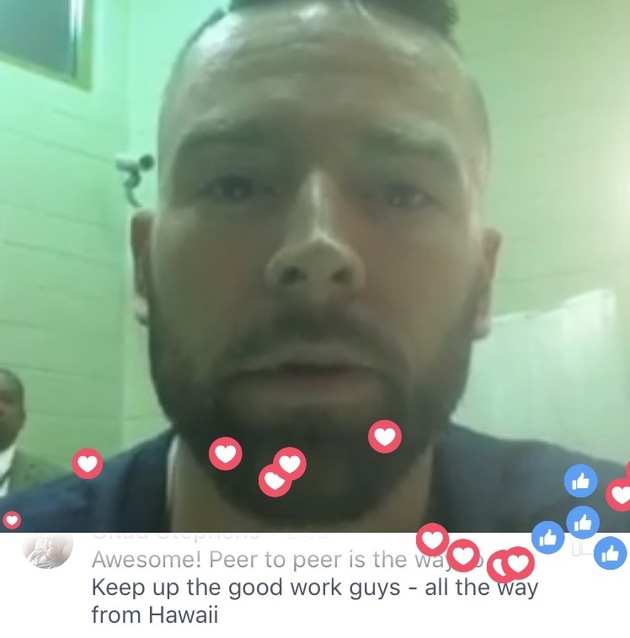 The Facebook Live post that should change the way America has been addressing the intersection of the addiction crisis and criminal justice reform.

This past week was the very first Prescription Opioid and Heroin Epidemic Awareness Week, designated by President Obama in a signed proclamation. I was fortunate enough to add my voice to the cause via a Medium article for the White House on Thursday. While I was honored to speak up on behalf of the more than 45 million Americans impacted by addiction and recovery, I thought it would be even more relevant to end this important week with a message from some men who are proving the status-quo dead wrong.

So, I picked up the phone and called my good friend John Shinholser with the McShin Foundation in Richmond, VA. John is on the front-lines every day, healing families and saving lives. He’s helped to implement one of the most unique, progressive recovery programs in America, the Chesterfield County Jail Heroin Addiction Recovery Program (aka HARP). I asked him if we could get the County Sheriff to allow us to bring a cell phone into the tank and let the inmates take over my Facebook LIVE to tell their stories. After talking with the Sheriff, not only did he give us permission, he said this is something that must be done. You see, Sheriff Karl Leonard – a Republican from a rural Virginia county – has seen the deaths and devastation from addiction first-hand. He deals with it every day. And he’s sick and tired of politics as usual. Sheriff Leonard was willing to try something different with respect to how we’re facing addiction in America. He’s facing it with urgency, compassion, empathy, and skill. And it’s beginning to heal his community.

These guys have a message for Hillary, Donald and the rest of America. See for yourself:

After the live feed wrapped, we were informed that this was, in fact, the very first Facebook Live ever done from within the walls of a jail. And that warmed my heart. It did so because with all the negative media recently around addiction, it’s important that America hears from the faces and voices that are flipping the status quo right on its head. What amazed me even more was that Sheriff Leonard is paying for this program from his own budget. He can’t get any state or federal funding for it. That’s unacceptable, especially since it only costs about $2,500 a month for 40 men ― or about $750 per year to truly rehabilitate each inmate. Imagine the long-term economic savings if we implemented a program like this in each and every small town and big city across the country. According to a study by the academic journal Crime & Delinquency, providing only 40 percent of the drug addicted treatment and recovery services over incarceration would save the U.S. economy over $12.9 billion per year.

I could go on forever about this subject. But I’m going to leave it here. Listen to these men, they have a voice. Even though they’re temporarily confined behind the walls of a county jail, they inspire us all to look at addiction and criminal justice a little differently. Maybe, one day soon, we can look upon this moment in time and talk about how the Sheriff and inmates in a rural Virginia town helped end the addiction crisis in America. I know it’s a tall order ― but it’s small victories like what’s happening in Chesterfield that’ll truly turn the tide.