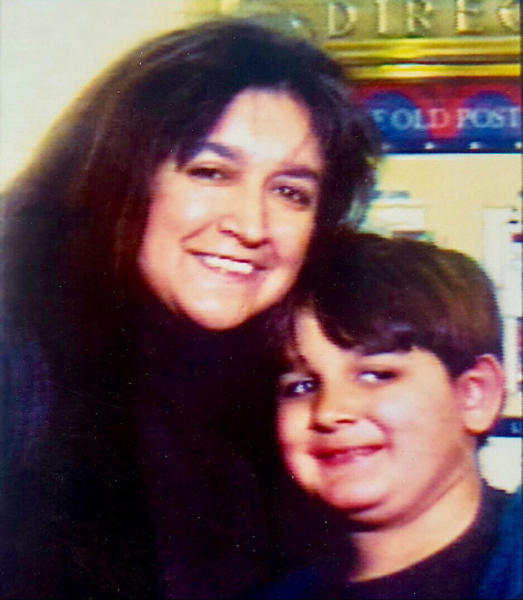 A friend accidentally sent me a text message meant for someone else:

“Hi. Here with a friend who just lost her son.”

Although the text wasn’t meant for me, it was about me. I am that friend who just lost her son.

I am the woman with that sobriquet of sorrow that seems as apparent, even to strangers, as a slogan on my T-shirt or a neon sign above my head.

I am different from who I was on that sunny morning two weeks ago when I walked out my front door and left behind my normal life forever. I didn’t know then that my big, brilliant, bullheaded boy Devin, my eldest son, my friend, my rock, was just a couple hours away from sticking a syringe of deadly heroin into his arm.

I assume it was his arm, though there is much I do not know yet about his habit. Until that moment when my sobbing, screaming younger son Nik called me to tell me something terrible had happened, I hadn’t known that Devin had ever shot up, smoked or snorted heroin. In that moment, I realized that the son I thought I knew so well, from the size of his jeans to the size of his heart, had a terrible secret.

He was 23, two weeks shy of his 24th birthday. He was living at home, helping care for his siblings. Two nights before he died, he told me he had come up with the perfect birthday gift: for me to pay for a hotel room in Las Cruces, where he and his friends had tickets to a blink-182 concert.

I laughed at such an extravagant gift.

I think of this now as a sign that he had not planned to die. He had no death wish. Yet every time he plunged the needle into his vein, he was willing to gamble away his life for another high.

I think of this now and know I would have gladly paid for any extravagant gift if it meant he could live.

We know the statistics. For much of the past decade, New Mexico has ranked first or second in the nation for fatal drug overdoses, most of those deaths from prescription opioids and heroin in numbers that exceed the combined state death toll from vehicle crashes and homicide gun deaths.

Recently, New Mexico has slipped to No. 8, not because we have figured out how to slow the rising body count, but because other states like West Virginia and New Hampshire are now waging war with the opioid crisis – and losing.

Ninety-one Americans die of opioid overdoses every day, a rate that has more than tripled since 2010, according to the Centers for Disease Control and Prevention. I wrote my first column on the deadly inevitabilities of heroin early that same year when a brave mother told me how she watched her handsome 18-year-old son wither away from an incurable brain disease caused by smoking heroin.

Her story and the others that followed blew away our long-held image of heroin users as skeevy, skeletal street junkies. While we weren’t looking, smack found its way into good neighborhoods and good families. It was killing the good kids. Our kids.

My son is now part of the statistics.

We had talked about heroin, Devin and I. I made him read my columns. I made him promise to stay away from heroin. He thought I was being melodramatic.

“Mom,” he told me, rolling his eyes. “Quit worrying. Heroin scares me. I hate needles.”

I believed him – until March 8.

It took 15 minutes for paramedics to get a pulse that day, though almost certainly he had been down for longer than that when his brother found him unresponsive in bed, his lips already blue. His brain had gone too long without blood and oxygen. The damage was too severe.

In the hospital, I held Devin’s hand. I begged him to stay. But I knew he couldn’t, he wouldn’t in that incapacitated, brain-burned state. Ten hours later, he left us, surrounded by family and friends, so many friends, crowded and crying in a small hospital room.

Some of those friends, I learned later, had known about Devin’s heroin use. They think it started in November after a breakup with a girlfriend. To ease his broken heart, a friend showed him how to inhale heroin, as if smoking were somehow safer, more acceptable, than shooting up.

At some point, Devin must have lost his hatred of needles. After he died, I found a backpack in his room filled with dozens of unused syringes, packets of alcohol wipes and a sharps container in which to dispose of used syringes. The container was full.

His friends tell me they tried to pull him back from the abyss, but Devin was in too deep. So alarmed had they become over his drug use that some of them, including his younger brother, began carrying Narcan, an over-the-counter opiate antidote. They had used it several times to revive him, including a time when he passed out at the wheel while driving to our home in the East Mountains one winter night.

A friend who was in the car that night told me he pleaded with Devin to get help and was kicked out of the car and left on that dark, cold mountain road.

This was not the Devin I knew.

None of them, not even his brother, had seriously considered telling me about Devin’s heroin use. They had promised him they wouldn’t. They had believed he would never die.

I had missed every sign, a failure of my motherhood, an egregious violation of the natural order of things that I should be alive while he is dead.

My mind still plays tricks. It fools me into thinking he is just off with friends playing Magic cards around the campus duck pond. Or at Sprouts selecting exotic cheeses and beers. Or hiking to Carlito Springs with his beloved dog, Maggie.

But like life preservers they come, my friends and relatives. They come, my role models and teachers, mothers and fathers I have come to know and admire who allowed me to write about their anguish over losing their children to violence, war, DWI, disease or drugs. They embrace me now in a way others can’t because they bear the same holes in their hearts as I do now. They know this feeling. And they know how to keep breathing.

And so I look to them to teach me how to navigate in this new normal, how to survive with grace and with purpose, how to keep loving Devin in this new way, how to feel his presence in the trees and the stars and the laughter of his friends.

I just lost my son. That is who I am now. But someday I will know that is just a part of who I am.

And so I am back to writing, back to what I know, which is to say, what I don’t know.

I am grateful to those of you who have reached out to me to offer your condolences, your stories, your shoulders to cry on, your casseroles of lasagne and chicken enchiladas.

I am also grateful for having had the privilege of being Devin’s mom for as long as I was allowed. Devin’s birth made me a better person. I pray his death makes me an even better one.

Joline Gutierrez Krueger is a columnist at the Albuquerque Journal. The Voices Project and ryanhampton.org would like to offer our condolences and heartfelt thanks to her and the Journal for allowing us to publish this story.