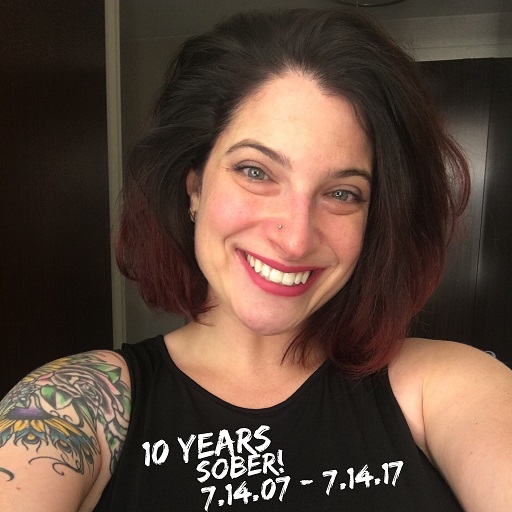 Insecure, sweet girl who had trouble fitting in, was bullied, but always kept her kind heart. Raised by a good mama and papa and older brother as role model. Traveled abroad for 14 out of 18 years of childhood. Learned Spanish and a bit of Arabic; acted in plays and musicals; worked hard for her good grades. Still felt like something was missing.

Phase I and II of recovery: Checked self into intensive outpatient rehab. Wasn’t sure if it was a “forever” thing. Started like not having alcohol as a crutch but still felt insecure in own skin.  Began therapy and took daily SSRI for anxiety. Worked 12 steps. Then didn’t work 12 steps. Ate healthy but still indulged. Made things right with family as best as possible. Registered (and completed) 12 races in 12 months. Became a sober karaoke star. Read loads of recovery memoirs and self-help books.

Phase III: sought community around year eight and wanted to prove to self and all others listening that our recovery is our own to define. Wanted to share story on a more public stage. Wanted to be a trailblazer. Found out there was already a massive trail and felt the honor of walking it as one of many recovery pathfinders, blazing a trail together. Proudly joined fellow advocates, writers, bloggers, podcasters, yogis, spiritual leaders as the face of a new recovery.

Laura Silverman is the founder of The Sobriety Collective, a digital community for creatives in recovery from addiction and mental illness.  She is proud to be a sober woman and will celebrating 10 years of continuous sobriety and long-term recovery on July 14, 2007, which is epic given where she started a decade ago.  Laura would love to hear from you – write to her at laura@thesobrietycollective.com.