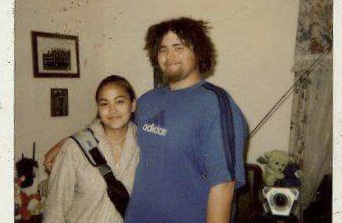 I was born in Charlotte NC January 27th 1982. My parents are amazing people and so is my sister. I was so blessed in that department. I couldn’t ask for a better family.

Somewhere around age 12 I started to feel like I was different from everyone. Also that I didn’t wanna be like other people. I started using about this time . Smoking and drinking. Smoking pot became an everyday thing .

There was a close circle of friends and we all used together. Everything was all fun and games. Life was pretty good. I became very close with a guy named David and a girl named Barbara. They got me. We used heavily. By 16 I was an IV drug user. I also already knew people who had been murdered for the lifestyle they lived. We kept using.

In the 9th grade I was kicked out of school. Which opened up the floodgates too keep living the lifestyle I had chosen. At 17 my close friend Barbara was sent to live in another state because her father had found her needles. While it was super hard it was good for her I guess. She went to college. Got married and had beautiful kids.

My habits and actions got worse. Me and my friend David used IV drugs everyday by this point. In the middle of the original OC craze. It had consumed our life. You couldn’t trust us. We would lie, cheat and steal  I also did lots of amazing things like traveled around the country and went to Woodstock 99. By 20 I had driven across the country a few times. I had been to something like 40 states. I loved to see and go. Just go!

I never had a problem making friends. I knew people everywhere. I wonder how many of them knew I had become a junkie.

Oct 31st 2002 a good friend of mine was murdered over one OC 80. His son was one. For whatever reason I didn’t read the warning signs loud enough.

April 4th 2004 I went to detox. An old friend who I used to use with took me to a meeting. I stayed clean. I picked up a year clean and thought I would never use again. I moved to California. Life was good.

October 18th 2008 my childhood best friend David was found dead. He was 27. I was heartbroken. Five days later my roommate shot himself . Me and his daughter found his body. That week changed my life forever. I was a mess. A doctor put me on benzos. Emotionally distraught I took them. Relapse crept in slow. After some years clean I was smoking pot again. Taking nerve pills again.

Eventually I moved back home to South Carolina  Things weren’t bad. I had my first and only child. Then I got busted for selling pot and things spiraled out of control from there. Pain pills I was prescribed became a habit.

Slowly I started buying stronger stuff on the street. Eventually I went back to IV use. It didn’t take long before I sold everything I had. Life was a mess once again. This time I found myself in the middle of the fentanyl craze.

I must say I’ve never seen things as bad as they are today. It’s completely out of control. Heroin has never been so available.

Anyway. My close friend Barbara had always remained in my life. No matter how far apart. She came home to South Carolina. It was so good to have her around but at the same time I was in the middle of an awful run. She had her problems too.

June 2017. I hadn’t seen my dear friend in a few days . Her use was out of control too and I wasn’t going to co sign that I thought it was ok. I was gonna go see her though. We were having a text conversation and I left out to go see her. She stopped responding to text  I realized I hadn’t asked her where she was. I had no way to find her. I turned around and went home.

My friend left this world that night from an overdose. She left behind 3 kids. I know what you are thinking but she was a great mom. A great person. The best person I’ve ever known. Addiction doesn’t discriminate. She was too good to leave this world that way. But she did. I couldn’t save her.

I got clean not long after. Kicking a long Benzo habit and Fentanyl habit. 10 days clean and after leaving detox I was in the hospital delusional from not sleeping those ten days. It was rough.

But I didn’t use.

I went to treatment. I focused on myself.

In a few days I will have 9 months clean again  Life isn’t perfect …but it’s a lot better today. I have hope. I can offer someone else hope. I don’t wanna use. I lost more friends than I can count and it’s only getting worse

My name’s Matt and I’m a grateful recovering addict .