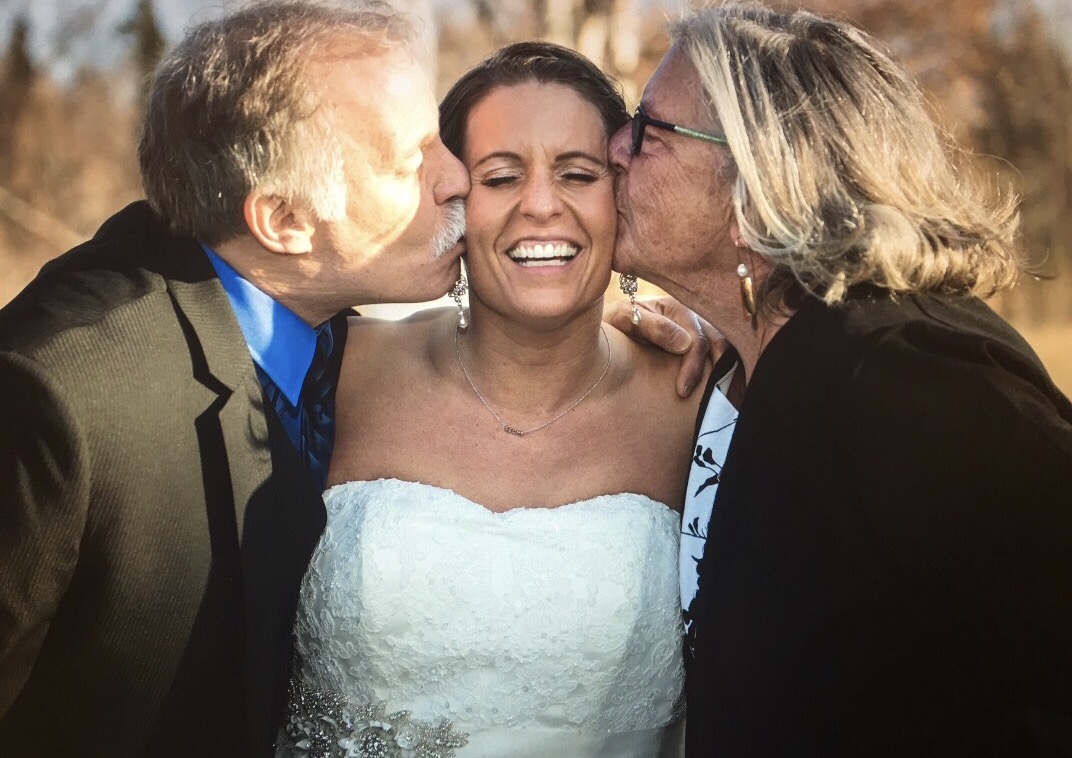 As the Anchorage Wellness Court recognized Catherine Adcock for her strides in addiction recovery, Deb Hageter watched from the back of the room. She stood to support her new friend. She’d triggered Catherine’s arrest years earlier. Deb, a pharmacist in Palmer, Alaska, made a phone call that led to dozens of prescription fraud and drug possession charges against Catherine. It also led to an unlikely friendship between the two women, a bond both say will last. Catherine says Deb’s call saved her life.

Deb couldn’t have imagined sharing this moment in 2012. She was working behind the counter at the Three Bears pharmacy on the Palmer-Wasilla Highway. That’s where she encountered Catherine, who was picking up a called-in prescription from an Anchorage doctor for a large quantity of Vicodin. Deb remembered that Catherine’s color was “death gray.”

The pharmacy technicians pointed out that Catherine had been picking up that amount of pills every 10 days. Deb, who only worked part-time, had filled the prescription herself three times. Deb couldn’t ignore the red flags. Researching the prescription history only added to her suspicion. The prescribing doctor had once misspelled her own name on the script, if records were to be believed. Something wasn’t right.

Fearing for her customer’s well-being, Deb sought answers. She felt that to do less would be ignoring a dangerous situation. “Nobody’s going to die on my watch,” she remembered telling colleagues and herself.

At the time, Catherine worked hard to stay high. She was deep in a hole she had been digging for decades. She’d been an alcohol and drug user since she was a teenager. At 20, one dose of Oxycontin began a chase for pills that lasted for the next 15 years. Along the way, she learned how to manipulate doctors and hide her addiction from employers in Alaska and Washington.

Catherine, now 38, said she even made a suicide attempt at 25. “It still makes me cry, because I wasted so many years,” she said. Catherine hadn’t worked long as a medical assistant before she exploited her ability to call in prescriptions. All she needed to do was forge a signature and return a faxed request from a pharmacy close to her Wasilla home. At first, it seemed too easy: few protocols were in place at the time.

“It was just ‘Let me try this. Let me see if it works,'” Catherine said. “And it worked.” It worked dozens of times in the next seven months. Catherine’s days began with six Vicodin and two Xanax, she said. More would follow in an hour. How her day progressed depended entirely on how many pills she could feel at the bottom of her pocket. At one point, she was taking more than 60 pills a day.

Running low on medicine prompted anxiety. Refilling the prescription involved hovering around the phones and fax machines, all while socializing to keep up the appearance that everything was fine. Catherine still has no idea how she managed to avoid the suspicion of her colleagues.

“I prayed to get caught. I prayed and prayed, because I couldn’t stop,” she said.

In July 2012, Catherine heard a coworker mention that she had forwarded a voicemail from the pharmacist to the doctor at the clinic. Heart dropped to the floor. Two days later, colleagues watched as police led her out of the building in handcuffs. She faced 48 charges, including 47 felonies, related to possession of controlled substances, fraud, and forgery.

The intervention saved her life. Deb, at the pharmacy, never second-guessed that sounding the alarm was the right thing to do. “Generally, in that case, I just pray and ask God to take care of her and watch over her,” she said. “And I’m just grateful she didn’t die and that I wasn’t the one that gave her her last dose of medicine that would kill her.”

Catherine felt the same way after 14 months as a participant in the Anchorage Wellness Court, one of several therapeutic programs operated by the Alaska Court System. The rigorous program offers some people facing alcohol and drug-related crimes an opportunity for a reduced sentence or dismissed charges. Participation means strict adherence to an exhaustive regimen of treatment, employment, sobriety testing, and court appearances.

More than 50 people were honored at the Boney Courthouse on April 30 for graduating from the Anchorage Wellness Court. Catherine, who now lives in Anchorage, said she didn’t realize at first that successful completion would mean she would avoid felony convictions. She just wanted to learn the skills for clean living. When she graduated, all 47 felony charges were dismissed. She pled guilty to a forgery misdemeanor.

For years, Deb had no idea how it had played out for Adcock. She has seen her share of dubious prescriptions and patients trying to game the system since her career began in 1987. It can be tough to remain diligent, especially when pressed for time, she said. But one day, a woman approached her at the counter.

“Do you remember me?” she asked. It was Catherine.

Hearing her speak it brought the whole situation from two years earlier back into focus for Deb.

Catherine started crying and said, “I’m here to thank you for saving my life.”

The two women are in frequent contact now, and both say that’s unlikely to change.”Every time she’s in the Valley, she comes to visit me for hugs,” Deb said.

Deb feels comfort knowing she only needs to reach for the phone in her pocket to connect with a person who cares for her well-being. The two text each other regularly, just to say hello.

Deb keeps it with her always. “It reminds me to just be kind every day.”