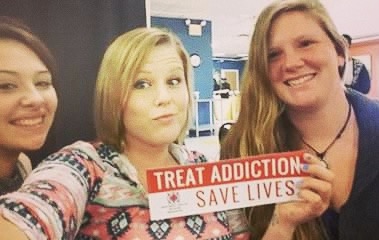 I have struggled with a Substance Use Disorder from a very young age.  I started drinking and smoking weed when I was 10 years old.  I was being abused outside of my home and because my home life was so chaotic I didn’t have anyone I could turn to for help.  My father was an addict and my mother was addicted to the pain and chaos that comes with living with someone in active addiction. Drugs and alcohol were all I had.  I was always uncomfortable with who I was and I struggled with my sexuality for a long time, which only perpetuated my substance use.  It was a horrible feeling to be so miserable about who I was and to have no one to really turn to.  Because of the sexual abuse, I didn’t trust anyone.

At 17, I barely graduated high school and started my first real relationship with a girl.  My use really slowed down during this relationship and my life seemed pretty “normal”.  I finally had someone I could talk to and trust.  When that relationship ended about 4 years later however, my drinking started again and I was drinking way more than previously.  I had depended on another person for my safety and happiness and when I lost that, I lost myself.  Once again, I was left with no one I could trust and depended on substances to get me through each day.

When I was 23, my father committed suicide.  I was devastated.  I can only assume that living the way he was became too painful and he only saw one way out.  I will never have any real answers about why he did what he did.  What I do know is that once again, I felt completely abandoned and lost.  I continued to progress in my own addiction and had multiple suicide attempts myself.  After one of my attempts, I woke up in ICU and all I remember is being angry that I was alive.  My use didn’t slow down any once I was released from the hospital until, several months after my last attempt, I found out I was pregnant.

I was 24, pregnant, and alone.  I still didn’t feel like I had anyone I could really turn to and I hid my pregnancy from my mother and everyone else in my family for as long as I could.  I did however, manage to stop using and remained abstinent throughout my pregnancy.  I thought that she was the answer to everything that had been wrong in my life.  My daughter was born January 28, 2011 by cesarean and along with that came prescriptions for a lot of opiates.  That started my journey with opiates and my life very quickly continued down that same dark path I had been on many times before.  My daughter was not enough to stop me from using and today I realize that was a huge responsibility to place on such a little, innocent person.

Throughout my many years of using and destroying anything that got in my way, I had managed to avoid any legal repercussions.  I had gotten one DUI when I was 21, but that never slowed me down.  That all changed at 27.  I very quickly began the cycle of getting arrested over and over again.  Even throughout my many arrests, it never once occurred to me that it was the drugs.  I still thought that it was everything and everyone else’s fault.  It wasn’t until I got arrested in NC, four hours away from everyone and everything I knew that I finally realized that maybe I had a problem and needed some help.  I wrote a lot of letters to family back home begging them to come get me and promising things would be different this time.  I finally knew what was wrong with me and I would just stop using drugs and everything would be fine.  About 3 months after being arrested, a friend of mine finally came and bonded me out.  Within 5 minutes, I was high.  It wasn’t that I wasn’t sincere about wanting to stop, I had just underestimated my addiction and the hold that drugs had over me.

Over the next few years, I made many attempts to get clean and had some periods of abstinence.  But each time I relapsed my using got progressively worse and I continued the same cycle of being arrested repeatedly.  I will never forget my last week of using.  I had lost everything again and hadn’t spoken to anyone in my family for months.  I was miserable and alone and really didn’t want to live anymore.  I didn’t there was any way out of the horrible cycle that was my life for so many years.  I just wanted the pain to end.  Hopeless and desperate, something told me to reach out one last time.  On October 26, 2015, I shot up for the last time and drove to the only place I knew of to ask for help.  I ended up in the parking lot of Hatcher Memorial Baptist Church, which is where The McShin Foundation is located.

I have not found it necessary to use since October 27, 2015.  McShin helped save my life and I am extremely grateful that such an organization exists.  I had nothing other than the clothes in my car which I had basically been living out of for months.  I had never been in a recovery house before and had no idea what a recovery community organization was really all about.  I lived with other women that truly understood what I had been through and we were able to be a strong support system for one another.  McShin helped me really get involved with the recovery community here in Richmond and got me involved with the 12-step fellowship that continues to save my life on a daily basis.  I was also required to attend groups throughout the day at the recovery center and I got more involved with service and helping others.  I became a peer leader at McShin and was a house leader for 6 months.  When I moved out of McShin, I continued to return every day to volunteer in any way that I could.  I really loved helping other women and giving back to the organization that had such a huge part in saving my life.

In July 2016, I was hired to work at McShin doing all the in-house accounting and very quickly became employed full time as McShin’s Financial Controller.  I couldn’t believe the opportunity and the level of trust that being given to me.  As a 7-time convicted felon, I didn’t think I would ever find a good job again.  Through recovery anything really is possible. In July, I was also able to start seeing my daughter again.  Being able to be a mom again and truly be present for my daughter has been one of my biggest blessings in recovery.  It was hard waiting so long to see her.  I had so much shame and guilt over being absent for so much of her life because of my addiction.  Today I am so grateful for that 9 months that I had to work on myself and work through some of that shame and guilt before I saw her again.

Thanks to recovery, I also have relationships with other family members again today.  Some of those relationships have been strained more than others and I am optimistic that those relationships can be healed again one day also.  I have real friends in my life today and people that I can trust and truly depend on.  Since I work for an RCO, I am constantly surrounded by others in recovery and have meaningful relationships with co-workers and my boss.  Recovery isn’t just something I have to do today, it is a huge part of who I am.  I never thought that I would have so many people I could turn to for guidance or suggestions that have walked down paths similar to mine.  Knowing other people that have walked through the pain and have come out on the other side stronger is what gives me the hope I need to continue to push myself.

Sharing my story with others is not something that is easy for me to do yet.  Sharing so much of myself is still foreign and very unnatural to me.  But hiding my struggles and then hiding my recovery is not something that worked for me in the past.  Being a face and voice of recovery has been an important part of my process and helped me accept myself for who I am and where I am in life.  Knowing that what I have overcome could possibly help another addict that is still suffering, is what pushes me through those uncomfortable feelings of opening myself up.  Recovery has given me a voice and the ability to use that voice for good.  There is no shame in being in recovery from a substance use disorder and I want everyone to know that recovery is possible for everyone.

My life is amazing today.  I still have so much work left to do on myself, but I have come a long way over the last 19 months.  My process has been really slow in a lot of ways.  Recovery is such a beautiful process that will continue throughout the rest of my life and for that I am grateful.  I come to work every day and get to do what I enjoy and help other recovering addicts in the process.  I am comfortable with who I am today.  I have hope today which is not something I ever remember having.  And I have faith and trust that if I continue in this process that I will love myself more and more every day.  I truly believe that helping others is what I am supposed to do.  It gives me so much purpose and watching other women come alive in this process and become mothers and productive members of society again is truly an amazing experience.