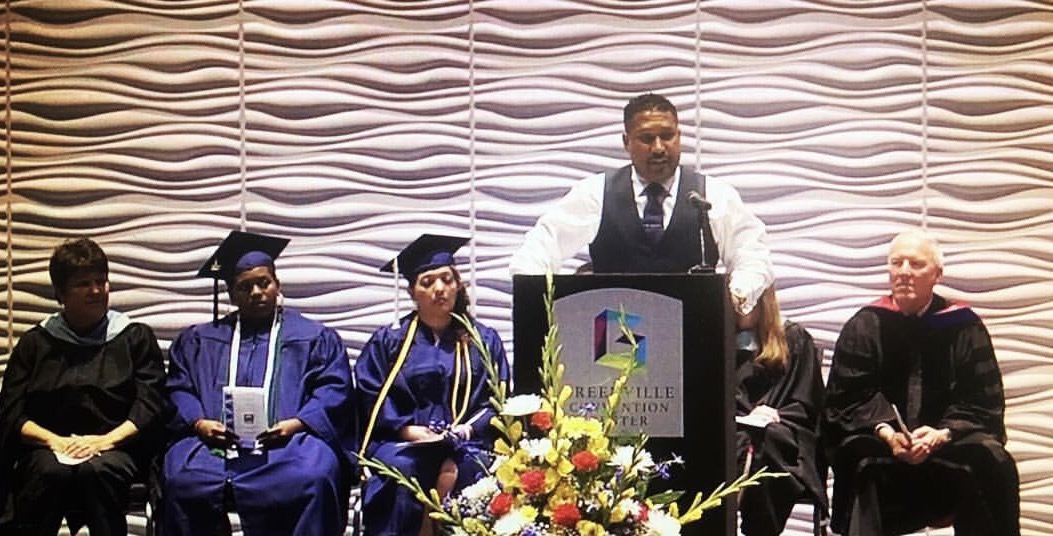 When we arrived at the hospital, I remember coming to, my bare chest exposed as I felt wires and tubes all over me.  I remember the feeling when they pulled the gurney off the back of the ambulance and the wheels hitting the ground as they took off running with me.  It felt so surreal. I saw the fluorescent light panels flash by on the ceiling as they raced to save my life.  We bounced off the walls in the hallway into a treatment area.  They were speaking in medical jargon as they were tearing away my clothes and hooking up IV fluids.  In my crazy mind, I was thinking, “Okay, this is enough of this.”  I wanted it to be over.  I felt as if I were watching a TV show and I could just change the channel, but once I realized, I mean really realized, that this was indeed me and this was not a TV show, I tried to get up but couldn’t.  I felt paralyzed.  Not only did I feel physically paralyzed, but emotionally as well because right then in that moment, I knew I was dying.  I was going to die.  I knew it and all I kept thinking was, “I don’t want to die like this.  I’m not ready.  I’m too young.  I’m not right with God.” This was just one of the many dark roads my addiction led me down.  Yes, on that day, I was blessed. The doctors and nurses that worked on me did save my life.  But even after overdosing, dying, seeing Heaven and hell, being intubated on life support awakening from a drug-induced coma, it still did not stop me from using.  Unfortunately, my bottom was yet to come.

Growing up in Spanish Harlem around pimps, drug dealers, and gangsters was the norm.  At a young age some of the violence I witnessed, I believe, hardened me.  I saw things a child my age should have never seen. I make no excuses for my addiction, however, I do believe a person can become a product of their environment. When I walked out of my home in the Stanley Isaacs Holmes Towers Projects in Manhattan NYC at the age of 15 it was not hard for me to adapt to drug dealing and the street life that came with being an addict.  I, as most addicts, in the beginning thought I had everything under control. I thought I found the “feel good” solution in the form of angel dust, crack cocaine and heroin. I could not have been more wrong.  I used drugs to numb the feeling of being in the streets and doing the things I was doing to survive. Even in a room full of people I still somehow felt alone. I would sit alone in the pissy staircases of the projects and get high to suppress the dreams I had of being a family man, having a nice car, money, and a home.  Instead I sat alone… a junkie.

My addiction led me to losing everything I had. At one point in my life I was homeless with everything I owned in 2 plastic shopping bags. I cursed God for my lot in life. I grew bitter and I didn’t care what I did or how I did it as long as I was getting high. I had no fear of committing crime, being incarcerated, overdosing etc… I went on like this for many years. One day I overheard a friend that just came back from North Carolina talking about how nice it was there and that they were going back soon. I saw this as my opportunity to get out of NYC and get a fresh start. I was wrong yet again.  I do not care how hard or far you run, you cannot run away from yourself.  At first things were going pretty well. I obtained my NC driver’s license, found a job and a place of my own.  For once in my life things were looking on the up and up.  Unfortunately, the friend I came out to NC with also had a substance abuse problem so it was just a matter of time before things went right back to the way that they were but on an even more devastating path. I decided that I was not going to work for pocket change anymore.  I knew I could go up to NYC and get drugs, bring them back, sell them and make twice what they were worth. I bought a gun and started doing just what I set out to do. Crossing state lines with drugs and guns took guts and I found it in the form of heroin, so heroin and I became best friends. It wasn’t long before this all came crashing down on my head.

Because of my addiction, I made some bad decisions and those decisions changed the course of my life forever. I hurt a lot of people, especially those that were closest to me. I found out the hard way that drugs, alcohol and firearms don’t mix.  After being incarcerated, obtaining a felony record, overdosing, and losing everything I had, I thought my life was over. Fortunately God had other plans for me. I found my Lord and Savior Jesus Christ in late 2002.  I wish I could tell you that my life went perfect from there but I cannot. However, I was never the same afterwards and I was always headed in the right direction from that day on. After about a year of sobriety I relapsed and went back into active addiction for over 2 years. In 2005 I hit my bottom when I came to from a blackout doing 70 mph on I-95.  I was disoriented. I pulled over on the side of the road, my gas light was on, my phone was dead and I had a small pile of money in the passenger seat. After looking at a highway sign I saw I was in Virginia. I walked around my vehicle looking for signs of a crash, bullet holes or something to give me a clue as to what was going on. I saw nothing. I was able to make it to a nearby gas station that was attached to a motel. I grabbed some of the money and realized it was all 20 dollar bills. I took out the max limit from an ATM wiping out mine and my wife’s account. I realized right there and then I needed help. I thought to myself what if I would have killed someone, a family or someone’s child, even as a junkie I couldn’t live with that. After taking a short nap and gathering myself, I headed home, back to NC.

I was blessed to have met my soulmate in 1997. She hung in there with me even when others told her to leave, that I wasn’t ever going to be nothing but a junkie. She saw in me what I never could see in myself; because of her and my children I am alive today. Once I got home from the blackout trip on I-95 I immediately sought help and was one of the first trial patients on a new, at the time, maintenance medication called Suboxone. I successfully completed the program and got off of subs in 11 months. I am blessed to say that on February 23,2017, I celebrated 11 years clean and sober from all substances. By all accounts I should be dead, dying or in jail, but instead, I went from a park bench to a property owner, from a cell to a distinguished college graduate, from a bum to a businessman and from hopeless to full of hope. Recovery Is Possible. God Is Good.