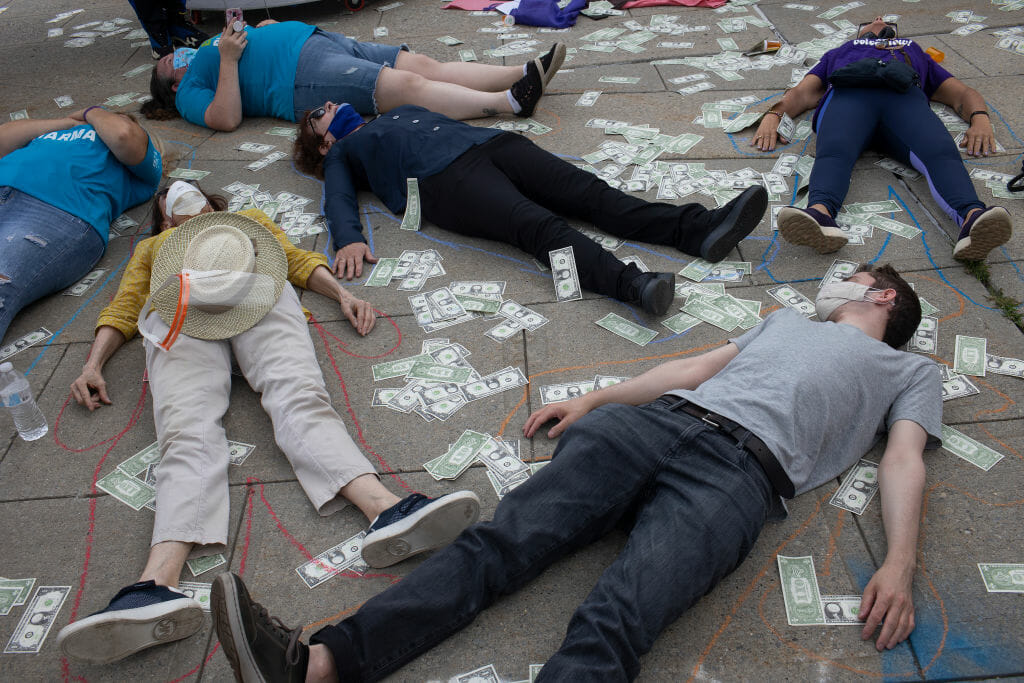 When a bankruptcy judge approved a reorganization plan for Purdue Pharma last year, an accompanying provision shielded the Sackler family owners from legal liability. That clause, in effect, denied victims of the opioid epidemic their day in court.

But last Thursday, about two dozen of those victims got a chance to air their grievances directly to three of the Sacklers. And they didn’t hold back, telling of incalculable loss suffered by them or their loved ones from physician-prescribed OxyContin during the three-hour hearing, which was conducted via Zoom due to COVID-19 restrictions.

One of those was Ryan Hampton, whose own addiction began more than seven years ago with an OxyContin prescription to treat knee pain, leading to overdoses and periods of homelessness.

“I hope that every single victim’s face haunts your every waking moment and your sleeping ones, too,” said Hampton, according to the Associated Press.

Tuning in remotely to hear the victim impact statements – but unable to respond – was Dr. Richard Sackler. The former Purdue president and board chair has denied the company or family bear any responsibility for the opioid crisis. Also attending, via video, were Theresa Sackler, wife of the late Mortimer Sackler, and David Sackler, Richard Sackler’s son. Mortimer, along with Richard’s father Raymond and a third brother, bought the company that became Purdue Pharma in the 1950s.

Another mocking rebuke came from Kristy Nelson, who lost her son Brian to an opioid overdose. She said she and her husband plan to visit the cemetery on what would have been his 34th birthday.

“I understand today’s your birthday, Richard; how will you be celebrating?” asked Nelson, referring to Richard Sackler’s 77th birthday last Thursday. “I guarantee it won’t be in the cemetery. … You have truly benefited from the death of children. You are scum of the earth.”

Her statement called to mind a 2001 email from Richard Sackler, in which he used the same derogatory phrase to refer to people with addiction. Nelson punctuated her remarks by playing for the Sacklers a recording of the 911 call which she made the day her son Brian died.

The Sacklers agreed to hear the statements under a proposed $6 billion settlement funded by the family. The settlement was approved a day earlier by the U.S. bankruptcy judge overseeing Purdue’s chapter 11 case, Judge Robert Drain, despite opposition from the Department of Justice and 20 states.

The Sacklers have said that the settlement, which the family increased over a previous $4.3-billion offer in order to win over nine holdout states, “will allow very substantial additional resources to reach people and communities in need.” A Purdue spokeswoman told The Wall Street Journal the company has “the deepest respect and admiration for the people who bravely shared their stories today.”

For the agreement to take effect, though, a federal appeals court must reverse a December court order by a U.S. district judge, who quashed the earlier settlement due to a clause releasing Sackler family members from civil lawsuits, even though some states protested. There, the judge ruled the bankruptcy judge did not have power to release Sackler family members from future liability. Purdue is appealing the decision in the U.S. 2nd Circuit Court of Appeals.

“Look, I don’t like the third-party releases, either, but 150,000 Americans died last year [due] to an overdose.” Hampton told CNN. “The [abatement] dollars have never been needed more than they are right now.”

Yet the Justice Department’s bankruptcy arm has said it intends to continue opposing the previous deal in the appellate courts, contending that third-party releases aren’t permitted by the bankruptcy code. If the release clause causes the plan to unravel, the money might not reach communities in the throes of the epidemic.

Of the settlement itself, estimated to be worth about $10 billion, $750 million would go directly to victims or their survivors. The Sacklers would pitch in $5.5 billion to $6 billion over 17 years, most of it to combat the opioid crisis. More than $150 million would be provided to Native American tribes and over $100 million for medical monitoring and payments for children born in opioid withdrawal.

The plan also calls for dissolving Purdue and transforming the company into a public trust, dubbed Knoa Pharma, dedicated to combating the ill effects of opioids. In addition, the family agreed not to interfere if cultural or educational institutions they have backed wish to remove the Sackler name, as well as to release a larger trove of company documents. In exchange, Sackler family members would get protection from lawsuits over opioids.

Purdue declared bankruptcy in October 2019 as it faced a wave of lawsuits over OxyContin, the extended-release painkiller it started selling in 1996. Purdue twice plead guilty to criminal charges that it illegally marketed the drug, but no Sacklers have been charged with crimes. Nor have they ever apologized, although David Sackler acknowledged a “moral responsibility.”

The family previously agreed to pay $225 million to resolve the Justice Department’s civil allegations, which they denied. But the bankruptcy settlement does not resolve potential criminal liability.

Hampton, like some of the other victims who testified last Thursday, called for Sackler family members to face criminal charges. That’s also something a group of Senate Democrats urged Attorney General Merrick Garland to consider last month.

“The attorney general or a U.S. attorney or the Department of Justice should investigate the Sacklers criminally,” he said. “No member of the Sackler family has ever sat for a grand jury or been indicted. The DOJ should … make sure the Sackers get the same type of justice as you or I would if they were caught for the same crime.”